The usual water dispenser that we know of looks as such… 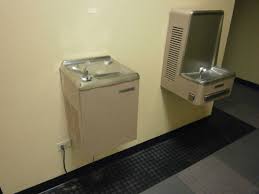 A regular water cooler
However in Myanmar, water sanitation is still quite a problem. Hence, access to drinking water is limited. So, how do the community overcome this? Well, water jugs are commonly found along the streets.
Some are in proper housing as above.. but there are others that are simply placed on racks in the open.
Such jugs was one of the first few things that got my attention when I arrived, while on the cab ride from the airport to my hotel. Most that I observed were placed in front of buildings or houses. Initially, I thought that it was part of a culture or Buddhist ritual (had this idea because in Chinese fengshui, water is seen as good luck). I also thought that perhaps it was meant for cleaning the feet before stepping into the house.

However, I also saw some along the streets with no other buildings in sight, or under the tree, away from the houses.

Eventually, I learnt from the locals that these jugs function as public water dispenser. The jugs are always covered to prevention contamination and there will be a cup or two for you to scoop out the water to drink. I was told the water is safe for consumption but I’m really not sure about the source of water (rain water? well water? bottled water??), hence I did not drink from it. I was also concerned about the hygiene of the cup, but from my observations, the locals simply gulped it down, without the lips touching the cup.
I understood from the locals that the water is accessible to anyone and that it will be refilled when it’s empty. However, I’m really not sure how that works. Like, are there officials making rounds every few weeks to refill the jugs? or residents are assigned to check on some jugs regularly?? I have no idea…
Personally, I feel that this act of placing jugs of water is not just another unique culture of Myanmar, but also speaks volume of the Burmese community. By ensuring accessibility of drinking water to the public, it shows the warmth and kind hospitality of the Burmese community. Through this, it is nice to see that community comes together to look out and provide for each other. The strong sense of community is really heartwarming and it is something that we can reflect on.
Another learning point from this is equality for all. Anyone can drink water from those jugs… it doesn’t matter if you’re a fisherman, student or businessman. Nothing matters. Anyone and everyone is entitled to it. Regardless of age, class/rank, religion etc, anyone can drink from that jug.
Simple water jugs, but a few learning points to reflect on 😉

I am not home
Joyful & Jittery
Anna's KStories

Korean Food, Fashion, and Drama... Everything about Korea

Traveling Matters to us

Making sure that your travel handprint sticks!

Revolutionary Pussy comes with a BAYONET

If you love travel, beauty and exercise, you're in the right place

One Man, One Van and No Plan.

Stories of Muslim Women in Singapore

the world is your classroom

The Ministry of JC

from parkrun to marathon and everything between